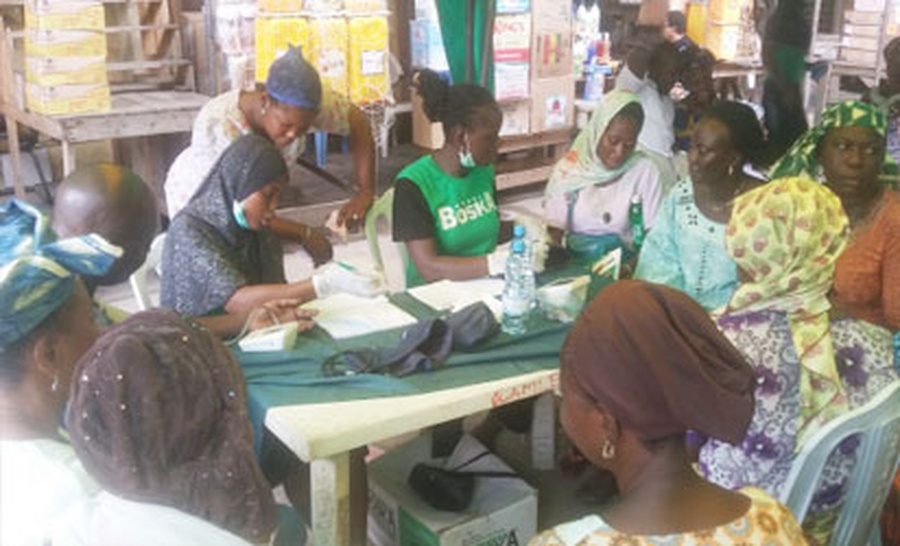 ABUJA— THE Senate, yesterday, reiterated its concern over the N500 billion spent on medical treatment abroad annually and promised to allocate at least 15 percent of 2017 budget, which comes to N1.1 trillion, to the health sector in line with African Union Abuja Declaration of 2001. HEALTH SCREENING: Boska brand team administering free health service to Ikorodu residents of Lagos recently. The declaration recommends a minimum of 15 per cent of total annual budget of member states for the health sector. Addressing journalists, yesterday, in Abuja, Chairman, Senate Committee on Health, Mr Lanre Tejuoso (APC Ogun Central), explained that the National Assembly’s stance for 15 per cent allocation to the health sector in the 2017 budget, against 2.78 per cent earmarked for it in capital votes and 8.49 per cent in recurrent votes. Tejuoso, who spoke on the poor state of healthcare system in Nigeria and way out of it through adequate budgetary provisions, stressed that the sector required emergency intervention and deserves priority attention. The National Assembly’s move is coming at a time latest statistics of the United Nations Children Fund, UNICEF, ranked Nigeria as the second largest contributor to number of preventable deaths among children below the age of five and women of child-bearing age across the world. Senator Tejuoso said: “Despite being a signatory to the 2001 African Union Abuja Declaration, Nigeria has not met the minimum requirement of allocating 15% of the total annual budget to health. “Not surprising we could not meet the Millennium Development Goal, MDG, target. We, as senators and members of the House of Representatives, feel the pain of the average Nigerian, more so in the face of the current recession and the attendant hardship it has brought on the people. “Therefore, the 8th National Assembly, as champions for improved health sector, is committed to increased appropriation to the health sector in 2017, in line with the African Union Abuja Declaration of 2001 which recommends a minimum of 15% of total annual budgets to be dedicated to health.” He said if 15% was allocated to the sector by the National Assembly, it would increase its present total allocation in the budget from N304billion to N1.1trillion. According to him, the 8th National Assembly will also ensure that the provision of the National Health Act 2014, which stipulates that 1% of the Consolidated Revenue Fund (CRF) be dedicated to the health sector, was strictly adhered to in the 2017 budget. Tejuoso, who lamented the parlous state of the health sector, however, quoted the latest UNICEF statistics ranking Nigeria second among countries of the world having high rate of preventable deaths among her citizens due to poor health care delivery system. “According to UNICEF, every single day, Nigeria loses about 2,300 children under 5 and 145 women of child-bearing age. This makes the country the second largest contributor to the under-five and maternal mortality rate in the world,’’ Senator Tejuoso said.