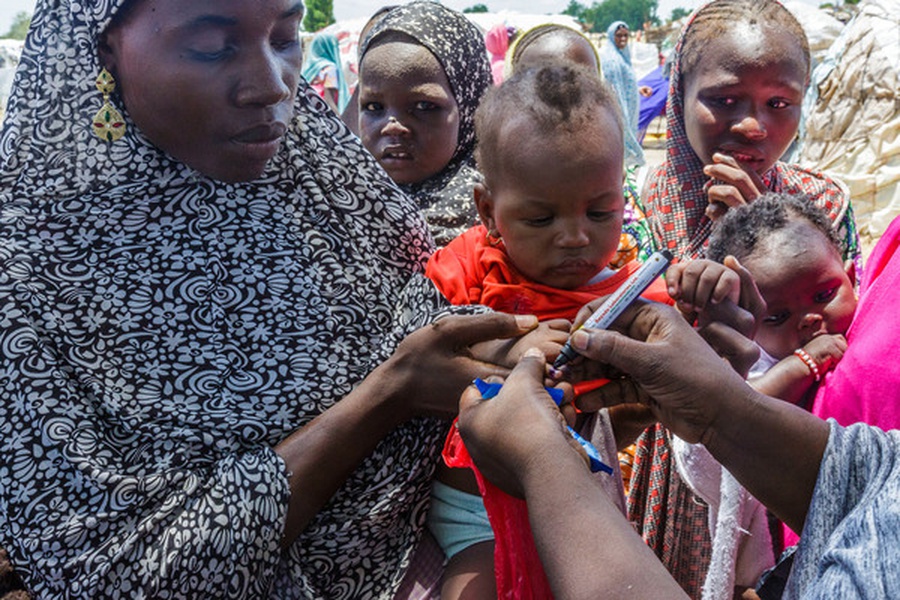 Dakar, Senegal, 11 October 2016 – A major health campaign is underway in the Lake Chad Basin area to vaccinate over 41 million children against polio to contain the recent outbreak of the disease in north-east Nigeria.

Populations fleeing conflict are on the move within the sub-region, raising concerns that the virus could spread across borders. Nearly 39,000 health workers are deployed across Nigeria and neighbouring Chad, Niger, Cameroon and the Central African Republic to deliver polio vaccines in areas at high-risk for the virus during five rounds of coordinated vaccination campaigns across five countries. UNICEF is procuring the vaccines and engaging the public through mass media and grassroots mobilization.

“The re-emergence of polio after two years with no recorded cases is a huge concern in an area that’s already in crisis,” said Manuel Fontaine, UNICEF Regional Director for West and Central Africa. “The scale of our response reflects the urgency: we must not allow polio to spread.”

“Children are dying and more young lives will be lost unless we scale up our response,” said Fontaine. “Through the polio vaccination drive, we can protect more children from the virus while also reaching children in need with treatment for malnutrition.”

The third round of the current polio campaign runs from 15-18 October with additional rounds scheduled in November and December. The immunization campaign is being delivered by national governments, with support from UNICEF, the World Health Organization, Rotary International, the US Centers for Disease Control and Prevention, and the Bill & Melinda Gates Foundation.

The coordinated efforts between the polio vaccination campaigns and childhood nutrition screenings are part of UNICEF’s scaled-up response to the crisis. However, UNICEF’s response remains hampered by continued insecurity, especially in areas of Borno state in Nigeria, and by a lack of funding. Of the US$158 million needed for UNICEF’s emergency response in the region, only US$50.4 million has so far been received.