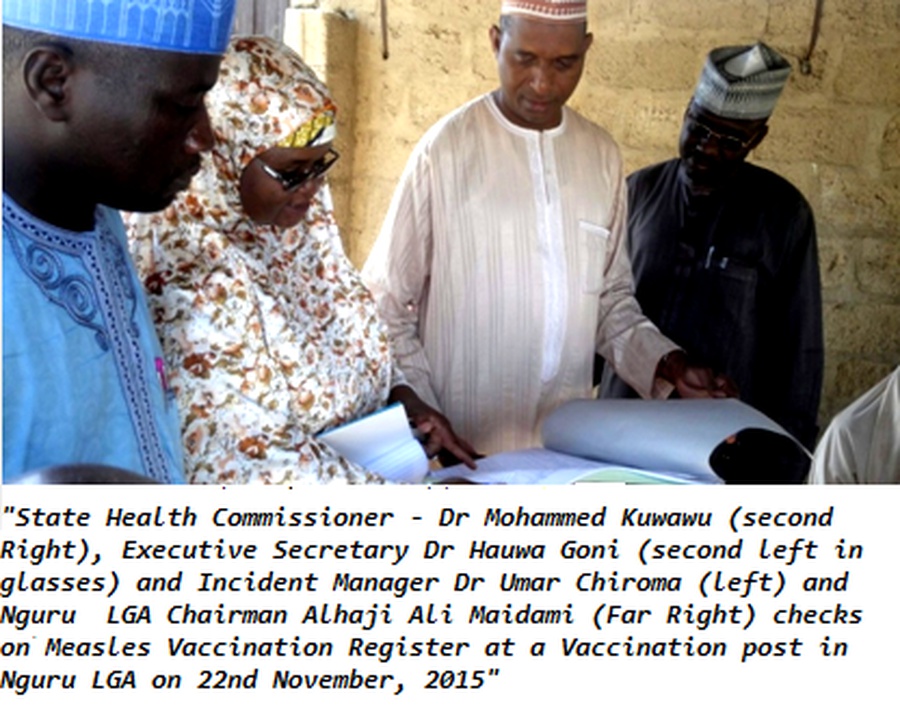 Yobe State is one of the North Eastern States in Nigeria that is security challenged but with promising efforts to contain measles. In line with the ongoing measles campaign aimed at providing a second opportunity for measles immunization through the implementation of high-quality Measles Campaign, the state is planning to vaccinate a total of 746,000 children aged 9 -59 Months of age. To reach this target, 890 vaccination teams have been mapped out and distributed across 15 LGAs and 156 wards. There are a total of 17 LGAs but two are not implementing this due to Security challenges, those communities living in those wards are trapped and will not have an opportunity to have their children immunized.

The ongoing efforts to reach children in security challenged areas like Borno and other States in the North East zone of Nigeria is a clear demonstration of devotion, courage, determination and sacrifice of field officers in the State and the zone. The inaccessibility of a number of settlements in the State is of concern and retards the efforts in measles elimination efforts in general. There is need to continue with the efforts to quantify and reach children in the north east.

The planned campaign was to flag off for the 20th of November, 2015 could not take place at the state level due to security reasons except in 4 LGAs. However, the campaign took off on 21st November 2015 but some few wards in Fune  and Fika LGA could not take off as health workers spotted insurgents in one settlement, abandoned the vaccines and fled. The settlements in those wards affected had to suspend the activity for the first day with hope to resume on day two after combing by the military personnel.

An exit interview with mothers and caretakers at vaccination posts indicated their trust in immunization and willingness to have their children vaccinated. Based on current trends of measles vaccination coverage and incidence, the 2015 global milestones and measles elimination goals set by WHO’s Member States will not be achieved on time.  While Nigeria is one of the countries that has at least one dose of measles-containing vaccine in their routine vaccination schedule, it is yet to meet the target of at least 90% of children vaccinated with a first dose and the need to ensure high coverage from the second opportunity provided by the ongoing measles Campaign. Despite the security challenges in the State, the technical leaders at state level are fully committed to ensure that all children are reached with the second dose of measles Vaccine. During the courtesy call to the State Commissioner for health, Dr Mohammed Bello Kawuwa, he had this to say - “I come from an area where the insurgents are a big problem but I am on the front line and ready to see these high numbers of measles cases get into history books in the state” He further committed that “I will personally do my own mobilization by meeting and calling the LGA Chairmen by phone even to mobilize their communities and ensure full uptake of the measles vaccine in each LGA. I know it’s a security challenge in two LGAs but we have no excuse not reaching the accessible LGAs”.

“Before we set off to the field, we first track the progress and security situation as well for the teams just to ensure our dedicated health workers are safe while carrying out the exercise” said Dr Adamu Baffale - WHO State Immunization Officer”. Daily Review evening meeting are going on at LGA level to respond to issues noted during the day and obtain data from all the wards that is eventually sent out through the “call-in data” on the same day.

As of third day of the campaign over 420,000 children were vaccinated in the state, in addition to findings that are discussed during the daily review meetings, teams are encouraged to ensure that campaign opportunity gives children a chance for the second dose and the same time focus on how the same dedication can be directed in strengthening our routine immunization programme. We need to emphasize the need to return for routine doses as well. We must restore faith in the health system and offer communities regular opportunities for their children to get the vaccines they need to stay healthy. The vaccinators who are spending the whole day in the hot weather and other health workers who are in the frontline need to feel protected so they can deliver these vaccines during the “five days window of opportunity” amidst the security challenges facing the state.

UNICEF and partners are playing a major role in this initiative by supporting and providing the vaccines and devices as well as transport, advocacy and social mobilization and training funding support for these activities in addition to technical assistance.