Join U-Report, Your voice matters.
Join Now
STORY
U.N.I.C.E.F launches its Content and Media Studio within ‘We the Peoples’ Hub at UN Headquarters 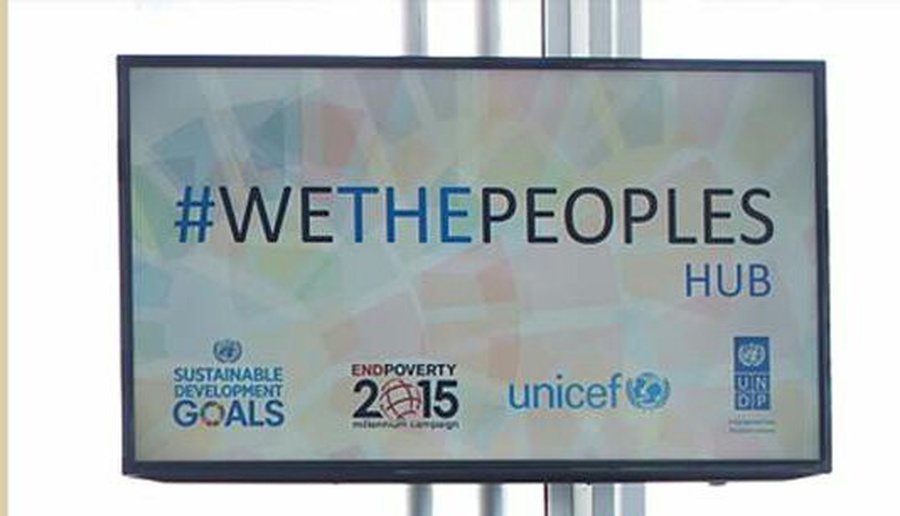 NEW YORK, 21 September 2015 - From 24 to 28 September, UNICEF will host its Content and Media Studio within the “We the Peoples" Hub – powered by UNICEF + UNDP + UN Millennium Campaign” at the UN Headquarters in New York. Through this digital media hub, UNICEF will connect young people across the world with the discussions at the UN Sustainable Development Summit and enable young participants to engage and interact with the world leaders and media attending the summit.

The UNICEF Content Studio is designed as a portal for youth around the world, connecting them with the world leaders and other decision makers attending the UN General Assembly in New York. The goal is two-fold: to monitor and track real-time conversations happening online about the most ‘talked about’ moments at the UN General Assembly, and then, to creatively respond around them, bringing a focus on children into the online conversation. UNICEF’s social media team will join these popular online conversations, creating content in real time that will seek to bring a significantly larger millennial audience into this discussion. By doing so, UNICEF will help get the word out on the most talked about and child-relevant moments at the UN General Assembly.

Within the media hub, UNICEF also aims to bring world leaders and young people together so that their interviews can reach new digitally targeted audiences who have previously not been engaged about the General Assembly or global development issues. These interviews will be facilitated by online celebrity hosts, such as YouTube star Maya Washington who has over 800,000 followers on her social media accounts and is known by engaging her fan base to raise funds for typhoon relief in 2013. The media hub will also host youth participants as citizen reporters and social media creators.


The Content and Media Studio is just one from the series of global communication events UNICEF is staging during this week to ensure that children and their issues are at the centre in conversations around the SDGs (#globalgoals). To date, a number of prominent personalities and key media outlets have expressed interest in engaging with young people through UNICEF’s media hub.

The ‘We the Peoples’ Hub is being organized in the framework of the UN Sustainable Development Summit and the 70th General Assembly to facilitate a bridge between the government officials attending the event and their constituents. In addition to the UNICEF Content and Media Studio, the hub also features a multi-media exhibition of innovative and interactive data-visualisations on Post-2015, Virtual Reality films enabling visitors to experience the daily life of those living in vulnerable situations, and participatory tools to monitor the decisions being taken at the summit in real time.