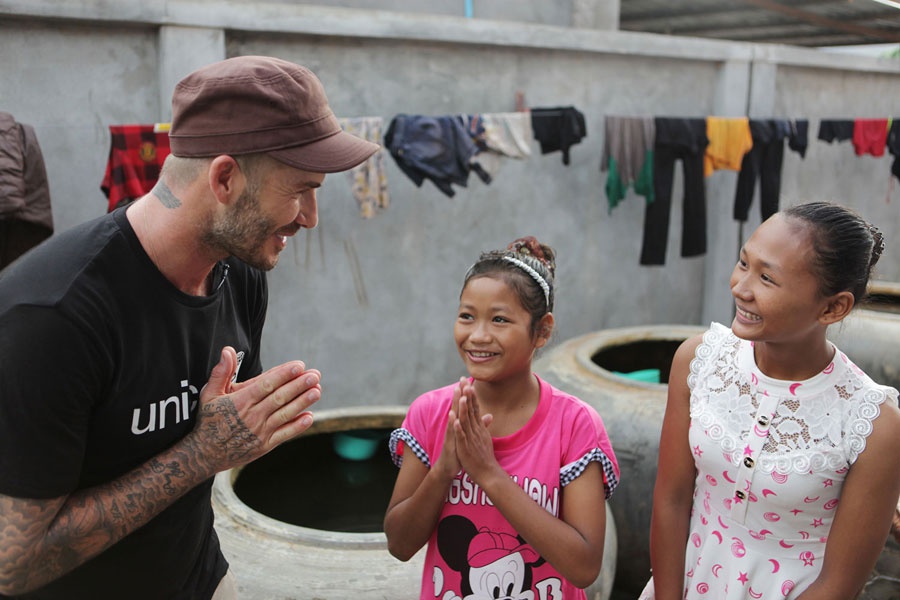 LONDON/NEW YORK, 15 September 2015 – UNICEF Goodwill Ambassador David Beckham is championing a letter signed by 18 child survivors of violence that calls on world leaders to end the widespread abuse that affects millions of children around the world. One of the signatories is a 16-year-old boy from Cambodia, where Beckham travelled earlier this year.


“When I visited Cambodia with UNICEF earlier this year, I spent time with children and young people who have experienced terrible violence and abuse often at the hands of the people who were supposed to protect them. Their stories were deeply distressing and as a father it is devastating to think that any child should have to suffer like this,” said UNICEF Goodwill Ambassador David Beckham.

“After listening to these incredibly brave children and hearing about the abuse they have endured, I want to make sure that world leaders act to protect children from danger. Every child, especially the most vulnerable, should be safe. That’s why I am going to travel to the UN this September, to make sure that children’s voices are heard and that the world comes together to stop violence against children.” Including the words of survivors of violent conflict in South Sudan, sexual abuse in Iceland, and child trafficking in Pakistan, the powerful letter highlights an epidemic of violence that is facing children in every corner of the world.

Next week, Beckham will stand alongside the United Nations Secretary-General Ban Ki-moon and UNICEF Executive Director Anthony Lake ahead of the adoption of the most expansive development agenda the world has ever seen. Together they will call on world leaders to put children, especially the most disadvantaged, at the centre of all decisions and investments made over the next 15 years.

At the beginning of this year, Beckham launched 7: The David Beckham UNICEF Fund and made a commitment to helping the world’s most vulnerable children over the next decade, including children affected by violence.

Beckham said: “In February, when I launched my new fund with UNICEF, I made a promise to speak out for the world’s most vulnerable children and to help shine a light on the issues affecting them. It is shocking that every five minutes a child dies as a result of violence. Children are being abused in their homes, schools and communities and this has to stop. I hope others will join me to call on world leaders to put children at the heart of the new goals and commit to ending violence against children.”

“Violence against children, especially sexual violence, leaves deep, indelible scars that live on in them right through adulthood. It rips apart families and societies, shatters stability and sets back progress. Yet all too often, it is unseen and cloaked in silence. We have to speak about the unspeakable, make it visible, and act to end it.”

The Sustainable Development Goals, the new 15 year development agenda that will be adopted at the United Nations General Assembly in September, present a historic opportunity to change the outcome that so many children endure – but only, says UNICEF, if the world focuses on the most disadvantaged and vulnerable children and puts their rights to safety, education and health at the heart of the agenda.

-     Around 120 million girls under the age of 20 worldwide (about 1 in 10) have experience forced intercourse or other forced sexual acts.

-     One fifth of homicide victims globally are children and adolescents under the age of 20.

-     Almost one quarter of girls aged 15 to 19 worldwide (almost 70 million) report being victims of some form of physical violence since age 15.